The Consumers have spoken !!!

HUGE THANKS to all of YOU who signed  the Change.org petition  to Retailers & Restaurants not to carry any GM potato !!

GMO potatoes will not be grown commercially on P.E.I. this season

Market in the United States is growing, says company

There will be no commercially grown GMO potatoes on Prince Edward Island this year, according to Simplot Plant Sciences, the company that developed the Innate potato.

Doug Cole, director of marketing and communications, said the company is holding off allowing commercial growth of Innate potatoes in Canada until there’s a proven market for them.

“There is strong interest from the grower community and retailers are also interested. But it’s a very involved purchase decision,” said Cole.

“Because we’re the only branded bio-tech item in the produce aisle it’s an involved decision, right, and so they don’t want to take it without a lot of advisement and we certainly understand that and we’ll be patient. When there’s a market we’ll be there.”

He said there are about five acres of test plots on P.E.I. this year.

Cole added over the last three years, the acreage in the United States has grown to 6,000 acres, and the potatoes
are sold in about 4,000 supermarkets across 40 states.

Simplot Plant Sciences has test plots in Ontario and Manitoba.

Cole said the company expects the company’s Gen2 potato that is blight resistant will be approved by the CFIA and Health Canada by the end of this summer.

That potato will require 50 per cent less pesticides, which he thinks both farmers and consumers will be interested in.

UN experts call for phasing out the use of dangerous pesticides in farming.

United Nations experts call for a global treaty to phase out the use of dangerous pesticides in farming, and urge a transition to agroecology to feed and nourish the world.

The new report (attached) highlights the catastrophic impacts of pesticides on the environment, human health, and society as a whole. Pesticides kill 200,000 people each year, 99% in low-income countries, mostly farm workers, children and indigenous peoples. They contaminate the soil and water sources, destroy beneficial insects and pollinators. Despite their widespread use, chemical pesticides have not achieved reduction in crop losses in the last 40 years. The report names and shames three powerful corporations: Monsanto Bayer, Dow Dupont, and Syngenta ChemChina who together control more than 65 per cent of global pesticide sales.

The UN experts say the most effective, long-term method to reduce exposure to these toxic chemicals is to move away from industrial agriculture, and adopt agroecological approaches, which are capable of delivering sufficient yields to feed and nourish the entire world population.

AFSA agrees and calls upon national governments and the international community to provide the political leadership and full support to establish policies, programmes and plans charting the journey to truly sustainable food systems in Africa based on agroecological principles, values and practices for the health and well-being of current and future generations.

(Detailed report  in UNA/HRC/34/48.  Only the opening paragraphs are shown here.)

Report of the Special Rapporteur on the right to food

Note by the Secretariat

The Secretariat has the honour to transmit to the Human Rights Council the report of the Special Rapporteur on the right to food, pursuant to Council resolutions 6/2, 31/10 and 32/8. The report was written in collaboration with the Special Rapporteur on the implications for human rights of the environmentally sound management and disposal of hazardous substances and wastes. In the report, a clearer account is provided of global pesticide use in agriculture and its impact on human rights; the negative consequences that pesticide practices have had on human health, the environment and society, which are underreported and monitored in the shadow of a prevailing and narrow focus on “food security”, are described; and the environmental and human rights regimes are examined to determine whether the constituent rules are sufficient to protect farm workers, consumers and vulnerable groups, as well as the natural resources that are necessary to support sustainable food systems.

Three New “Non-Browning” GMO Apples To Hit Store Shelves! Here Is How To Avoid Them

How to Avoid the New GMO Apples

According to the Ag publication from CapitalPress.com, about 1,000 to 1,200, 40-pound boxes of the new Arctic Golden, GMO apple will be sliced and sold in grocery stores for marketing purposes in the western U.S. this fall.

The company is growing most of its own apples in the Pacific Northwest, on the East Coast, and in Canada. [4] Retailers, food service, and quick-serve restaurants have all expressed interest in using the GMO apples according to the CapitalPress report, which means that people eating out may unwillingly become test subjects.

In order to make sure you’re avoiding the new GMO apples, here’s what you must do:-Buy certified organic or Non-GMO Project Verified whenever possible, or from a trusted local farmer-Do not buy any apples labeled ‘Arctic,’ which may be designated with a sticker or special packaging-Avoid buying any unlabeled or pre-sliced apples, like those found in cafeterias or kids’ meals

Source: Three New “Non-Browning” GMO Apples To Hit Store Shelves! Here Is How To Avoid Them 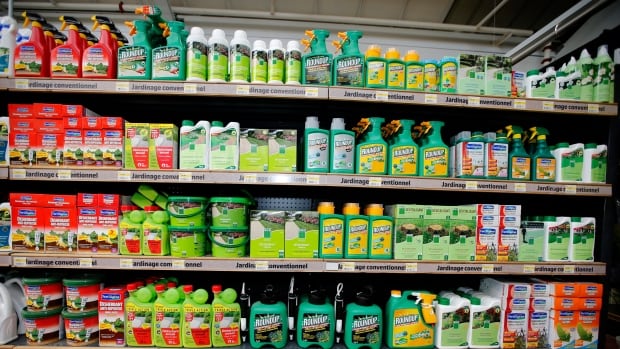 The Canadian Food Inspection Agency’s report on testing of glyphosate is titled “Safeguarding with Science: Glyphosate Testing in 2015-2016, and was published on its website this week.

Glyphosate is used to kill weeds, but can also be used to dry grains and legumes before they’re harvested.