There are 3 issues related to the state of seed and the current conflicts related to Monsanto, Indian farmers and the Govt of India.

Second is the issue of IPRs, patents, royalty ,technology fees  in the context of false claims and a failing technology, and the duty of Government to act to revoke a patent according to Article 64 and Article 66 of the Indian Patent Act. There is a show cause notice served to Monsanto by the Central Government regarding the patent.

The third is the issue of monopoly on seed. The Government has a duty to prevent monopolies being established . This is why we had the MRTP commission earlier, and now the competition commission .

Monsanto’s manipulation and greed in India has caused hundreds of thousands of Indian farmers to commit suicide. Between the years of 1995 and 2013, more than 300,000 farmer suicides occurred, many of which were linked to Monsanto. Farmers are forced to pay for Monsanto’s costly seeds, which then force them to pay for the expensive pesticides to effectively grow them, as Bt cotton’s pest resistant quality fades over time.

These farmers are losing their lands, and their livelihoods, due to the debt they incur trying to afford Monsanto’s products. Many of the farmers drink the chemical insecticides in order to commit suicide.

Mars has publicly announced plans to use clear, on package labels for GMOs.

But what about Nestlé? Will they hide behind sham QR codes like Hershey’s – or will they give consumers the right to know what’s in their food?

More than 88% of American consumers want to know if their foods contain GMOs. Nestlé should join Mars and other major food companies and commit to supporting consumers by using clear, on package labels for the presence of GMO ingredients. People have a right to know exactly what they’re buying at the grocery store.

Stand with Just Label It and the Food Revolution Network in signing the petition to tell Nestlé to get on the right side of history and to label GMOs – now!ADD MY NAME

A: Yes. Study after study and commentary after commentary shows that it does. It’s been seen with research on tobacco, chemicals, energy, and pharmaceutical drugs, which are the closest to foods.

Costco  replied” that currently  Costco does not sell any  GMO produce in stores in Canada and has no  plans to do so as of now.” Mar14, 2017

GE Free Comox Valley members  presented  letters from CV residents  to local grocers, stating customers preference that GMO  apple, fish and potato must be labelled  on the store shelves.  4 Grocers were each  given the 30 odd letters. Costco replied  the very next day  .

Costco’s support for Non GMO produce is inspiring to other retailers and  will make shopping at Costco a much more pleasant experience knowing their  internal  GMO- Free policy.

Attached is the letter which  you can download and redesign for your local grocers.

We consumers must act  NOW to make our voices heard. This is one way we can support the Bill C 291 which is currently (Mar-Ap 2017) being debated in the House of Commons,the bill calling for Mandatory Labelling of GMO Foods.

Private Members Bill C-291 for mandatory labelling of genetically modified foods will come up for debate in the House of Commons on March 10! Will your Member of Parliament speak in support of the Bill?

The second hour of debate is a few weeks later along with the vote.

In mid-January, the CEOs of Bayer and Monsanto, Werner Baumann and Hugh Grant, reported in a joint statement that they had a “very productive meeting” with the incoming president about their potential $66 billion merger.

The deal, which the two companies announced in September, would combine the German pharmaceutical and chemical group with the US seed giant — a move they say would boost agriculture research and innovation.

Spray Glyphosate before harvest: the residue stays in the cheerios !!

3 Comments Posted by lindacheu168 on March 1, 2017
Why Is Glyphosate Sprayed on Crops Right Before Harvest?

GLYPHOSATE, the main ingredient in Monsanto‘s Roundup herbicide, is recognized as the world’s most widely used weed killer. What is not so well known is that farmers also use glyphosate on crops such as wheat, oats, edible beans and other crops right before harvest, raising concerns that the herbicide could get into food products.

Escalating Use of Probable Carcinogen

Glyphosate has come under increased scrutiny in the past year. Last year the World Health Organization’s cancer group, the International Agency for Research on Cancer, classified it as a probable carcinogen. The state of California has also moved to classify the herbicide as a probable carcinogen. A growing body of research is documenting health concerns of glyphosate as an endocrine disruptor and that it kills beneficial gut bacteria, damages the DNA in human embryonic, placental and umbilical cord cells and is linked to birth defects and reproductive problems in laboratory animals. 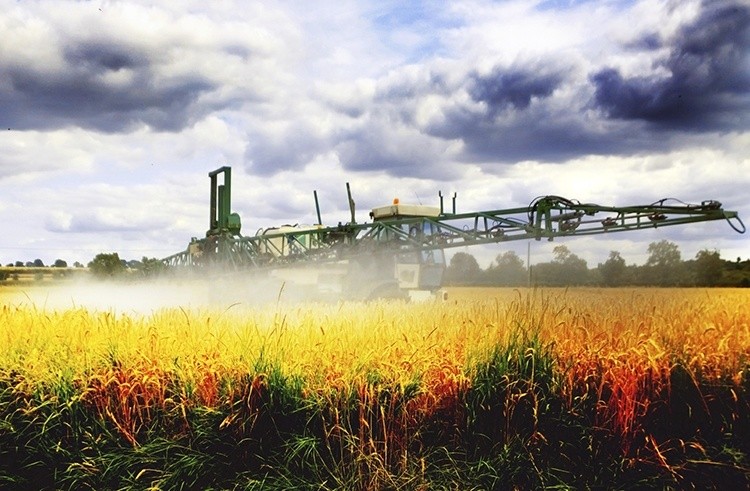 What is not so well known is that farmers also use glyphosate on crops such as wheat, oats, edible beans and other crops right before harvest.

Charles Benbrook, Ph.D., who published the paper on the mounting use of glyphosate, says the practice of spraying glyphosate on wheat prior to harvest, known as desiccating, began in Scotland in the 1980s.

“Farmers there often had trouble getting wheat and barley to dry evenly so they can start harvesting. So they came up with the idea to kill the crop (with glyphosate) one to two weeks before harvest to accelerate the drying down of the grain,” he said.

The pre-harvest use of glyphosate allows farmers to harvest crops as much as two weeks earlier than they normally would, an advantage in northern, colder regions.

The practice spread to wheat-growing areas of North America such as the upper Midwestern U.S. and Canadian provinces such as Saskatchewan and Manitoba.

“Desiccation is done primarily in years where conditions are wet and the crop is slow to dry down,” Joel Ransom, an agronomist at North Dakota State University, said.

“It does help hasten dry down and controls grain weeds and other material that slows down the threshing practice,” he said. “It has an important role in areas where it’s wet.”

He has concerns about the practice. “I think farmers need to realize that all of the chemicals we use are ‘bad’ to some extent,” he said. “Monsanto has done such an effective job marketing glyphosate as ‘safe’ and ‘biodegradable’ that farmers here still believe this even though such claims are false.”

The vast majority of farmers in Manitoba, Canada’s third largest wheat producing province, also use glyphosate on wheat, said Gerald Wiebe, a farmer and agricultural consultant. “I would estimate that 90 to 95 percent of wheat acres in Manitoba are sprayed pre-harvest with glyphosate; the exception would be in dry areas of the province where moisture levels at harvest time are not an issue,” he said.

According to Tom Ehrhardt, co-owner of Minnesota-based Albert Lea Seeds, sourcing grains not desiccated with glyphosate prior to harvest is a challenge.

“I have talked with millers of conventionally produced grain and they all agree it’s very difficult to source oats, wheat, flax and triticale, which have not been sprayed with glyphosate prior to harvest,” he said. “It’s a ‘don’t ask, don’t tell policy’ in the industry.”

Ehrhardt also says that crops grown to produce seed are not usually sprayed with glyphosate prior to harvest because this can damage seed germination.

Grain Millers, which has grain processing facilities in the U.S. and Canada, announced last year that it would not buy oats from Canada that had been desiccated with glyphosate. The company’s Canadian procurement manager, Terry Tyson, told Western Producer that glyphosate disrupts the natural maturing process and starch development, resulting in lower quality flakes and flour. He said the decision had nothing to do with health or safety concerns.

Still, there are obvious concerns about glyphosate getting into food products.

“We are told these (glyphosate residues) are too small to matter but can we believe that?” the Saskatchewan farmer asked. “I think everyone, even farmers that use and love glyphosate, would rather not eat a loaf of bread with glyphosate in it.”

Wiebe shares similar concerns. “Consumers don’t realize when they buy wheat products like flour, cookies and bread they are getting glyphosate residues in those products,” he said. “It’s barbaric to put glyphosate in food a few days before you harvest it.”

Wiebe believes the use of glyphosate on wheat may be connected to the rise in celiac disease. “We’ve seen an explosion of gluten intolerance,” he said. “What’s really going on?”

“Can you imagine the public’s response if they knew that glyphosate is being sprayed on the oats in their Cheerios only weeks before it is manufactured?” Ehrhardt asked.

Residues of glyphosate have been found in wheat flour. In response to mounting concerns over the escalating use of glyphosate, the U.S. Food and Drug Administration recently said it would begin testing foods for glyphosate residues.

Along with wheat and oats, glyphosate is used to desiccate a wide range of other crops including lentils, peas, non-GMO soybeans, corn, flax, rye, triticale, buckwheat, millet, canola, sugar beets and potatoes. Sunflowers may also be treated pre-harvest with glyphosate, according to the National Sunflower Association.

There are no statistics kept on the number of acres of wheat or other crops that are desiccated with glyphosate, according to Ransom.

While the pre-harvest use of glyphosate may account for a small amount of overall use of the herbicide, Benbrook says this still has a huge impact. “It may be two percent of agriculture use, but well over 50 percent of dietary exposure,” he said.

Further, he said: “I don’t understand why Monsanto and the food industry don’t voluntarily end this practice. They know it contributes to high dietary exposure (of glyphosate).”

Wiebe sees the situation in dire terms. “The most tragic thing is that industry is encouraging the use of glyphosate on wheat, farmers are using it, consumers are unaware of it and it’s having a powerful effect on the food system,” he said.

Golf Courses: Too green to be clean!!

Leave a comment Posted by lindacheu168 on March 1, 2017
INVESTIGATING THE POSSIBILITY HIS DAD GOT CANCER FROM PLAYING GOLF ON A TOXIC GOLF COURSE……PESTICIDES!!!
Education, News